The Only Way to Enjoy the Olympics While High 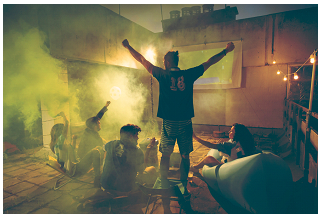 Notoriously, the Olympics prohibits the use of performance-enhancing drugs, which inconceivably includes cannabis. How weed could make any athlete swim faster, jump higher or run longer is anyone’s guess — and considering that cannabis has been legalized for both medical and recreational use in a significant portion of the U.S. (not to mention other countries like Canada, Uruguay, Mexico and South Africa) it seems exceedingly outdated to kick athletes out due to evidence of cannabis consumption.

Regardless, you can’t get high and participate in the Olympics — but you can get high and watch the Olympics. Here are a few Olympics games for stoners to play to get in the spirit of international sportsmanship.

Smoking Olympic Games
Getting high isn’t an Olympic sport, but the way some stoners consume cannabis, it should be. If you are eager to test your tolerance, you can put the Olympics broadcast on in the background while you engage your friends in the following smoking games:

Medusa
Participants sit in a circle, with everyone’s head down and eyes on the floor. On the count of three, participants look up and stare at another player. If two participants are looking at each other, they are in a race to shout “Medusa!” The last one to finish the shout must take a hit.

Taxi
Also called Hold Your Smoke, Taxi is a simple game that involves inhaling and holding one’s breath as long as possible. The first player takes a hit and passes the joint, pipe or bong to the next person in line, who does the same. Participants must hold their smoke in until the weed comes back to them. If anyone chokes or exhales before their turn, they forfeit their place in the circle and their access to bud until the next game.

Ash Bomber
To play Ash Bomber, participants need a cup, a sheet of tissue paper (toilet paper or rolling papers will do), a penny, a rubber band and a combustible like a joint or blunt. The paper should be secured around the mouth of the cup with the rubber band, and the penny is placed on top. After every hit, players will burn a hole in the paper using the lit end of the rollie. Whoever causes the penny to fall into the cup loses and either is out of the next round or must perform some task, like cleaning the bong or rolling the next joint. 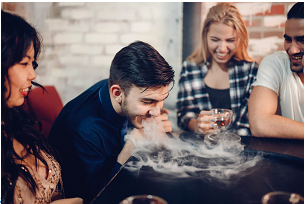 Categories
One participant sets the category and the letter for the round and provides the first example. Going in a circle, participants try to name an example from the set category using the set letter. Players who cannot think of an example must take an increasing number of tokes until they are out of the game.

Straight-faced Stoner
Players get good and high before starting this game. After a predetermined amount of time or number of tokes, a participant will shout “Straight-faced stoner,” at which point it is forbidden to smile. Anyone who cracks a grin is out of the game and must perform some penalty, like heading to the dispensary for more bud.

Olympics Smoking Games
If you prefer to be an Olympic observer instead of a participant in games of your own, you can watch the athletes compete and take a toke when…

There are plenty of reasons why athletes, even Olympic athletes, should take advantage of cannabis, from the pain relief and muscle relaxation to the reduction of anxiety and bolstering of mental health that weed can provide. However, it isn’t just top-performing athletes who can benefit from weed. Regardless of whether you use cannabis to improve your physical and mental performance or whether you simply enjoy the substance, you can find plenty of legal dispensaries in Tucson with top-quality cannabis products on their shelves.